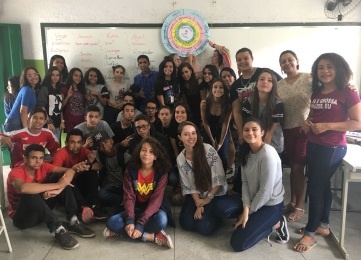 At the Federal University of Goiás in Goiânia, Brazil, Jacqueline Lima sought a framework that would help Master’s nursing students evaluate health promotion.

In addition, her students planned and evaluated sessions at Escola Municipal Ernestina Lina Marra, a secondary public school in Goiânia. In the face of rising rates of youth suicide in Brazil, students built a large moveable Circle of Health© to promote life and emotional health, and adapted it to address problems identified in the classroom. Now, the Circle of Health© is on view at the school and can be manipulated by other students to plan ways to face problems such as depression, racism, homophobia and bullying. Jacqueline is excited about the potential of the Circle of Health©.